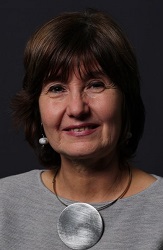 Monique Braem joined AEIDL in 1992 to set up the secretariat of the LEADER I Coordinating Unit. In 1995, she took over the job of assistant to the Director of the European LEADER II Observatory.
Since the beginning of 2002, she has been working within the external LIFE communications team. She is currently in charge of: the annual update of the LIFE country overviews, describing the situation of LIFE projects in each EU MS, and their respective translations into native languages (liasing with about 10 translation offices); the overall coordination of the LIFE project summaries process (new, ongoing and closed); and the collection and uploading of LIFE project publications. Her responsibilities also include: coordination of occasional, transversal tasks (administration, new LIFE website visuals, news and events). In 2021, Monique has also been in charge of an event and LIFE Nature publications promotion campaign. Until 2020, Monique was also in charge of the reporting (quarterly, progress and final) on the LIFE Communications Team’s activities. In December 2020, Monique joined AEIDL’s Business Unit, to support the team administratively in the submission of offers.
On top of that, she is a member of AEIDL’s General Assembly since 2010.
Prior to joining AEIDL, Monique worked for three years as the senior secretary to a Head of Unit in the European Commission’s Directorate-General for the Environment (Internal Market). She has a University Degree in Translation.
Although she completed her education in French, German could be considered her second mother tongue and, when necessary, Monique can make use of her range of linguistic skills: French, German, English, Spanish, Italian, Dutch and elementary Greek.