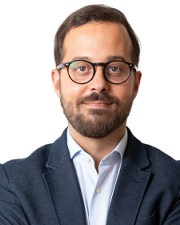 Enrique is the Head of the Policy Unit at AEIDL and has more than ten years experience in territorial and rural development.

Since he joined AEIDL in 2013, he has been extensively involved in EU-level policy networking in different networks support units for the European Commission such as in the European Network for Rural Development (ENRD) Evaluation Helpdesk, the European Fisheries Areas Network (FARNET) and the ENRD Contact Point. Currently, he is a policy analyst in the Common Agricultural Policy Network (CAP Network).

As Head of Unit in AEIDL, Enrique coordinates the policy direction of the thematic strands of the organisation, supports business development actions and contributes to the implementation of EU funded-projects (e.g. Horizon Europe) and technical assistance to European Institutions.

Enrique holds a Forest Engineers degree, an International MSc in Rural Development (IMRD) and an MSc. in International Business, Economics and Management. He is a Spanish national and is fluent in Spanish, English and Portuguese.