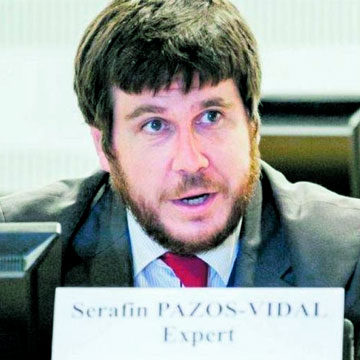 Serafín Pazos-Vidal holds an PhD in European Union. For 15 years he has been Head of Brussels Office of the Convention of Scottish Local Authorities and previously he represented in Brussels the East of England region and his native Galicia. He started his career twenty years ago at the Basque Government. He is a policy practitioner and published academic researcher in multilevel-governance, subsidiarity, EU Cohesion Policy, rural development, and comparative decentralisation processes.

He chaired over a decade and two programming periods the Cohesion Expert Group of the Council of European Municipalities and Regions (CEMR) and was its representative in the European Network on Rural Development (ENRD) and DG REGIO Partnership Expert Group.

Serafín has acted as expert in Community Led Local Development, lntegrated Territorial lnvestments, INTERREG, Rural Development, the EU Recovery Package,
depopulation and rural proofing for the Committee of the Regions, Council of Europe, European Parliament and the European Commission. He has also been involved in the development of several Operational Programmes in Spain and in the UK.

He is member of various academic networks such as the Regional Studies Association research network in Cohesion Policy, the Spanish Political Science Association or Red Localis.

He speaks Galician and Spanish, and works in English, French and Portuguese.