Community survival or destruction? Community development in the slums of Miskolc, Hungary 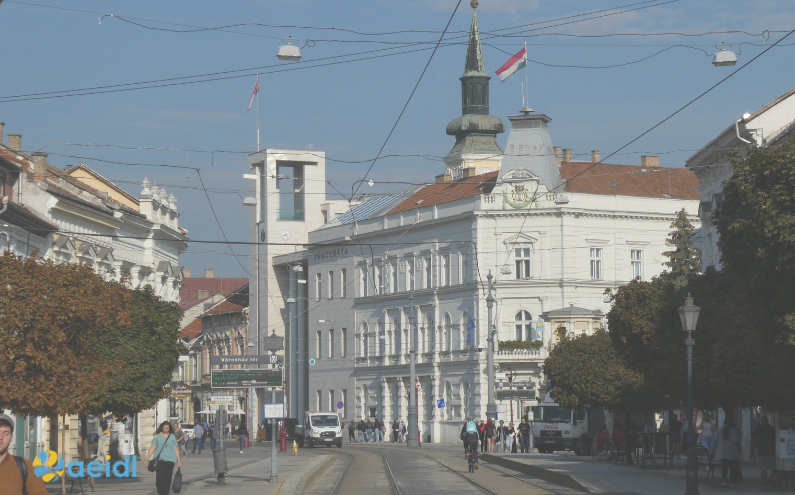 AEIDL is the EU-level partner in the 4IM project, which is developing an integrated way of delivering welfare services to slum areas in the Hungarian town of Miskolc. Its conference in September examined what life in these segregated areas is like, and how to improve it.

Miskolc is a town of 160,000 in the north-east corner of Hungary, 60 km from the border with Slovakia. A trade centre since mediaeval times, the town grew into a coalmining and steelmaking centre in the 19th century, but this industry has now largely closed down. Its long, handsome, car-free main street, off which branch numerous side streets and alleyways, has largely been renovated, but is today eerily quiet: much of the commerce has emptied out into shopping centres and peripheral supermarkets owned by global brands.

The town is home to a sizeable minority population of 25,000 Roma, most of whom live in one or other of 16 slums – densely-populated disadvantaged areas somewhat misleadingly called ‘segregated’ – dotted among the more general mid-rise blocks of flats. These present a very different picture from the town centre: the roads are unpaved, and the single-storey houses, end-on to the road, lack running water – which residents fetch from shared blue standpipes – or mains sewerage. Their populations are quite mixed – some Roma, some not – but share the fact of poverty. In the face of it this is odd because many have jobs – but these tend to be ‘off the books’, often as building labourers or cooks. Many residents are not even officially living there, but are still registered in their family’s home villages. They thus do not qualify for official help.

The population is in steady decline. Those who can find an opportunity elsewhere emigrate, and as they cannot sell their houses, simply leave them empty. They are immediately pillaged by their erstwhile neighbours. Other residents eke a living by collecting rubbish, sorting through it for saleable items – and then dumping it wherever they can. The municipal council does not collect this rubbish, and so rats proliferate in the unsightly empty plots.

The result is a marginal world where everything is decline: population, sense of community, living standards, health. The only thing that is rising is the average age of the inhabitants. In the past, the right-wing local government’s solution was to force residents to move out of some of these neighbourhoods and demolish the buildings. Meanwhile, no improvements are made. However Miskolc town council, opposition-controlled since 2019, believes in integration and avowedly aims to make the town “a place for everyone”. It has gone into partnership with the city of Košice (85 km away in Slovakia, but with a large Hungarian-speaking population), the university and two NGOs to integrate the city. The European partner in the project is AEIDL, which works mainly on sharing the results throughout Europe.

The 4IM project (Initiative for Innovative Integrated Interventions in Miskolc) has won some €850,000 in finance from EaSI to pilot an integrated welfare system in two of the town’s slum districts, Bábonyibérc and Tetemvár.

4IM builds on previous groundwork, in which local associations such as Abaújrakezdés have nurtured the first initiative to create Community Action Groups (CAGs) in the two communities. From the beginning of the 4IM project, these small active groups have been extended and strengthened with the help of the Social Innovation Resource Centre. This is a newly established managing body to coordinate the project activities and, as it is planned, to coordinate city-level integrated interventions for social inclusion in the long term. The Resource Centre has organised a number of self-help activities which have cleared rubbish and repaired road and wells. This work is now to be complemented with the development of an integrated approach to delivering welfare services within the municipal authority. The project is guided by the town’s Social Innovation Standing Working Group, and two Neighbourhood Coordinators are soon to start work as the residents’ access points to the city’s social and employment services. The project aims to bring at least 300 local residents into or at least closer to the labour market.

Community coaches play a key role. One line of attack is to keep more of the residents’ money circulating within the neighbourhoods. Tetemvár already supports a local shop, so the Bábonyibérc CAG is gestating the idea of opening one of their own. Both communities, Tetemvár and Bábonyibérc, dream of establishing community centres, possibly in containers. The main stumbling block at the moment is how to afford a connection to the electricity grid. Another idea is to capitalise on residents’ building and cooking skills.

In September 2022, the 4IM project held a conference in Miskolc town hall to take stock and plan its continuing activities. Under the guidance of facilitator Mátyás Domschitz and AEIDL’s communications trainer Robin Salter, members of the town’s Social Innovation Standing Working Group and the project workers learnt about the drivers of exclusion, thought about what inclusion means, mapped the population groups and their interrelationships, carried out role plays, formulated communication campaigns, and resolved bottlenecks in progress. Among the most interesting contributions was that from Kinga Szabó-Tóth from Miskolc University, who described the background to the bad conditions in the town’s segregated areas.

Slums don’t happen by themselves, she said. People move into town from rural areas, and use the segregated areas as stepping stones before they move elsewhere. So you can’t just abolish them at the stroke of a pen – if you were to demolish them, the same conditions would arise elsewhere. People are in transition. They live there in the present, and don’t plan for the future. Things are tolerable for the time being. Hence there is little sense of community and little communal activity. Some residents, particularly widows, have few friends and live isolated lives. But most people have someone they can turn to for help and could borrow €50 from in an emergency. The top spending priority is mobile phones.

A survey carried out over the summer looked into residents’ motivation, bonding, mental health, skills and resources. It discovered that “weak links” or bridging social capital – connections with people from different walks of life – are very important, and play a particularly important role for children. A surprising finding is that the populations of the two pilot areas are highly differentiated: there are middle-class people who like living close to the city centre, and people working abroad. Although many of the houses are dilapidated, many residents prefer their homeliness to living in a block of flats. And there is a lot of change, with people moving in and out. Overall, the population is falling, and around half the houses are empty. Unfortunately, the houses are difficult to sell so often fall into disrepair and are stripped of any valuable materials.

On the bright side, the skills base is strong in areas like building, tool repair, crafts, livestock breeding, cookery, baking and childcare. Although few people have business experience, there are a number of natural entrepreneurs. Some minor infrastructure improvements are visible – for instance there is a kindergarten in Tetemvár – and local services are not entirely absent: Bábonyibérc. has a bus service and Tetemvár, near the town centre, has a small grocery shop.

The job of the 4IM project is now twofold. On one hand the community coaches are building up community action groups and developing action plans. On the other hand, the municipality is working to how to deliver welfare services in an integrated way. The resulting model promises to be an inspiration for many European towns.

By: Toby Johnson, AEIDL board member