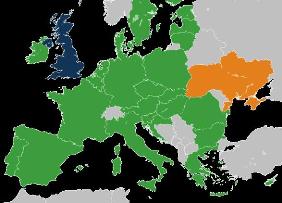 (04 March 2022) – Following the Russian military aggression against Ukraine, the Commission has suspended the cooperation with Russia and its ally Belarus in the European Neighbourhood Instrument cross-border cooperation programmes (ENI CBC) as well as in the Interreg Baltic Sea region programme.

At the same time, the Commission is urgently exploring legal and operational possibilities to strengthen the existing cross-border cooperation programmes between EU countries (Poland, Hungary, Romania, Slovakia) and Ukraine, as well as the participation of Ukraine in the ENI CBC Black Sea Basin Programme or the Interreg Danube Transnational Programme.

With more than 1,000 existing partnerships between regional and local authorities of the EU and Ukraine border regions, the programmes offer opportunities to channel rapid, effective support to Ukraine, including for the refugees.