From humanitarian crises to a structural approach of reception and integration 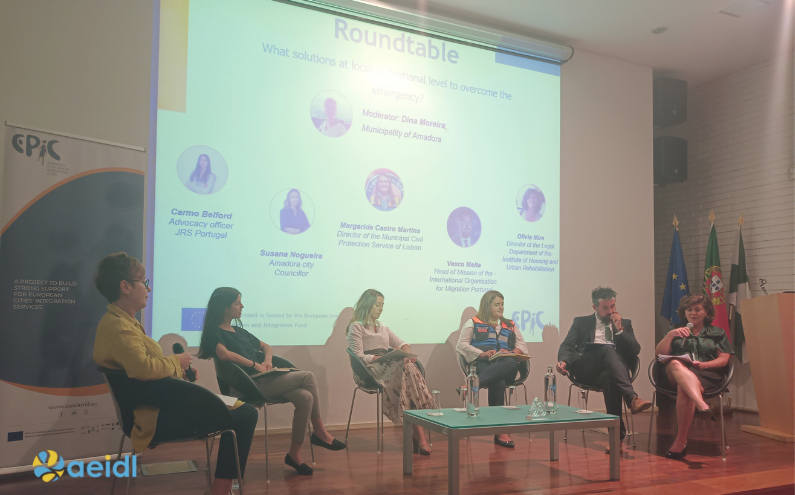 Insights from the EPIC International Conference in Amadora, Portugal.

AEIDL is one of the partners in the project, European Platform for Integrating Cities (EPIC), which addresses the challenges of integrating migrants by targeting medium-sized cities that need to develop expertise in integration services, while learning from the experiences of Local Authorities and NGOs in other European Cities.

On 28th September 2022, EPIC brought together a range of stakeholders working on social integration in Amadora, Portugal, for the International Networking Path event, From Humanitarian Crises to a Structural Approach of Reception and Integration. The International networking paths are fora that bring partners together to exchange practices and share information to facilitate the development of knowledge and cooperation.

Participants from across Europe had the opportunity to listen and interact with policy makers from local to international level, such as the Major of Amadora, NGOs and CSO representatives from different European countries working to make integration services for newcomers more accessible and resilient.

“Success in integration does not come without a joint effort to give a response to the emerging needs, especially when it comes to welcoming refugees coming under unexpected circumstances, such as people fleeing wars and conflicts, as happened in 2015 and now with the war in Ukraine,” said the Major of Amadora, Carla Tavares.

About the importance of having an international platform like the model that EPIC offers, she added that “To engage and exchange experiences with other territories around Europe that are going through similar issues and are putting in place processes to provide responses is very fruitful to get to know good practices that we can also build in our territory”.

After different keynote speeches to understand better reception systems and legal frameworks in Europe, the audience had the opportunity to hear the testimonies from those that have actually embarked on a journey with the hope of a better life in Europe. The panel “Human Library: a safe harbour at local level”, an initiative run by JRS Portugal, offered a glimpse of the experiences lived by Ghalia Taki from Syria, Hamad Hamdard from Afghanistan, and Tetiana Kozina from Ukraine. The panellists told of the very diverse realities they went through to make them and their families safe in Portugal, and how they navigated through different integration services to get them where they are today.

Reflecting on these three testimonies, as well as on their own experiences providing immediate responses to the latest humanitarian crisis, the national and international experts of the closing roundtable of the conference, “What solutions at local and national level to overcome the emergency?”, concluded that the current war in Ukraine and the fast mobilisation deployed by the EU27 showed how many of the traditional existing barriers could be removed to accelerate the process when there is political willingness.

“For countries less used to being at the front door of reception, it has been a learning process. But now new mechanisms have been deployed and lessons have been learned. If a person can get a resident number in just a few weeks, even days, and not to wait a year to obtain something that it is going to block them for getting access to many other services and processes, this is already a great improvement to ensure newcomers can integrate”, said Susana Nogueira, Councillor, at the Amadora City Council, for Housing, Development and Social Intervention.

As part of our storytelling work, AEIDL presented during a conference a video with a glimpse of how the project supports partners’ cities to improve integration practices in their territories through mutual transfer of knowledge & capacity building. Watch the video below.

The event also took participants to two field visits, one at the “12-15 Project”, a project aimed at fighting school dropout, and significantly decreasing absenteeism and the underachievement of youngsters aged between 11 and 16, mainly from a migrant background. The project focuses on children who have not completed the Portuguese 1st cycle of basic education (4 years) and aims to tackle severe behavioural issues like aggressive behaviour towards others, lack of interest and motivation toward school and deviational attitudes.

The second field visit was to JRS (Lisbon): Centro Pedro Arrupe, established in Portugal in 2006 to support migrants and refugees, providing them with social, psychological, medical and legal support, and also through the implementation of projects that focus on language learning, training, skills development and access to the labour market.