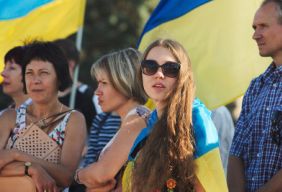 (20 April 2022) – The growing shortage of skilled labour may soon threaten productivity in Germany, and Europe’s biggest economy is now scrambling to make the most of well-trained Ukrainian refugees.

Russia’s invasion of Ukraine forced many Ukrainian refugees to flee the country, with over 300,000 coming to Germany. With men aged 18-60 being banned from leaving the country, there are about 40% of underage children, but the rest are mostly qualified women.

“These people are well trained and must be employed by employers according to their qualifications,” Education and Research Minister Bettina Stark-Watzinger explained on Tuesday (19 April). According to her ministry, “73% of refugees from Ukraine have completed their studies, 10% speak good German”, which is why the focus is now on speeding up recognition of their qualifications.

But integrating into the labour market in Germany has not been easy for Ukrainian refugees, particularly with heavy bureaucracy standing in the way – especially when the war first broke out.

The “refugees from Ukraine must, first of all, apply for the title of ‘temporary protection’ at the Foreigners’ Registration Office in order to obtain a work permit,” explained Sarah Strobel, project manager of the government project Network “Companies Integrate Refugees”. As of 18 March, this has been possible online in Berlin, for example, and “job placement is just starting,” she added. (Euractiv)