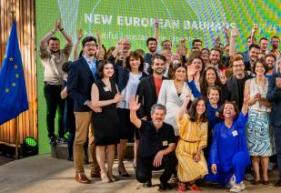 (June 13, 2022) – At the closing ceremony of the first ever New European Bauhaus Festival which took place on Saturday, Commissioners Gabriel and Ferreira announced the winners of the 2022 awards.

This year, 1,100 projects applied for the awards. Four prizes were awarded in each of the four categories, each time including prizes for already completed projects and “rising stars” for ideas from young talent aged 30 or younger.

In the “Reconnecting with nature” category, the winners are from Spain, France, Germany and Poland.

As for the “Regaining a Sense of Belonging” prizes, they were awarded to projects from Austria, Lithuania, Poland and the Czech Republic.

The best projects falling under the category “Prioritising the places and people that need it the most” were selected in Belgium, Greece, Italy and Hungary.

Finally, two prizes were awarded to the winners of a public vote: the “Gardens of the future” project from Cyprus and “Biophotovoltaics for nature and people”, a project from Spain in the “rising stars” category.