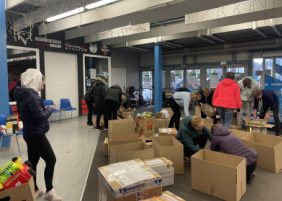 (07 March 2022) – As Poland braces for the arrival of at least half of the total of Ukrainian refugees, estimated at around two million, the southeastern town of Rzeszów is preparing to welcome them and provide longer-term support.

Rzeszów, the largest city in southeastern Poland, roughly 100 kilometres from the Ukrainian border, has become a humanitarian hub for the region.

“We are here in a border region, we have to take care of those that cross the border, we have to secure them a place to rest, check whether medical help is needed, feed them and direct to places in Poland, where they can stay for the next weeks,” mayor Konrad Fijołek told Euractiv.

“More than 500,000 refugees have already arrived in this region, in all of Poland maybe a million already, but for now there is enough place in the region and all of Poland,” Fijołek said. “Of course, if they become five times as much, it might become more tricky,” he added.

“There is an idea to repurpose the European Social Fund to use for providing support to all those who are coming, the logistics is a huge challenge but we hope that with national and European funds we can manage this,” the mayor said.

In the meantime, residents, in solidarity with refugees, deliver several tonnes of gifts to the several dozen collection points in the city, which include the community centres in each district but also in schools and shopping centres. (Euractiv)