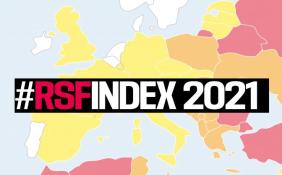 Record number of journalists detained in 2021

(16 December 2021) – Reporters Without Borders (RSF) noted 488 detained journalists in 2021, an increase of 20% compared to 2020, according to its annual round-up on abuses against journalists worldwide, published today.

RSF’s report looks at the repression suffered by journalists in 2021 and has logged a total of 46 killed, 65 held hostage, and 468 in prison. These figures are significantly higher than those published by the Committee to Protect Journalists earlier this month, which recorded 24 killings and 293 imprisonments.

The report notes that three dictatorial regimes, in particular, are responsible for this increase. These are Burma, which has been under military junta control since February, Belarus, where protests against the re-election of Alexander Lukashenko have led to the arrest of many journalists by the regime, and Hong Kong, where the new National Security Act of 2020 has enabled the local authorities to arrest at least 10 journalists.

The annual report also shows a new and unprecedented figure: 60 journalists detained are women. They now represent 12.3% of imprisoned journalists, compared to 6.59% in 2017. (Euractiv)