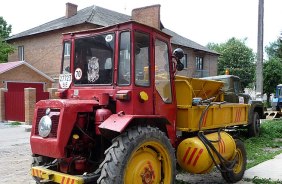 Small farmers, the unsung heroes of the Ukraine war

(21 April 2022) – The key to ensuring Ukraine’s food supply may come from an unlikely place: small and medium-scale farmers.

Until now, small farmers have been largely overlooked by the Ukrainian government in favour of large agribusinesses, Mykola Pugachov, deputy director of the Ukrainian Institute of Agrarian Economics, explained during an event on Wednesday (13 April).

However, this is rapidly changing in light of the war. “In a peaceful time, that was a good solution maybe – however, during a crisis, it is specifically important to ensure food security and efficiency of the private farmers, those individuals, small farmers,” he said, adding that their role is “now increasing”.

And this contribution is considerable, according to Attila Szocs from the Romanian small farmers’ association Ecoruralis, which represents 17,000 small-scale farmers. While rural households use only 12% of Ukrainian farmland on farms ranging in size anywhere from less than one hectare to over 100, the association estimates they contribute as much as 52.7% of the gross domestic agricultural output.

According to the association, Ukrainian small farmers now make up as much as 98% of the country’s total harvest of potatoes, 86% of vegetables, 85% of fruits, and 81% of milk. (Euractiv)