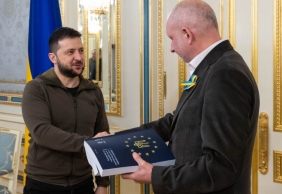 (19 April 2022) – Ukraine’s President Volodymyr Zelenskyy formally submitted a completed questionnaire on EU membership to the bloc’s envoy in Kyiv on Monday (18 April) and said he believed this step would lead to his country gaining candidate status ‘within weeks’.

European Commission President Ursula von der Leyen handed the questionnaire to Zelenskyy during a visit to Kyiv on 8 April, pledging a speedier start to Ukraine’s bid to become a member of the EU following Russia’s invasion of the country.

Zelenskyy submitted the document, reportedly completed in only 10 days, to the EU’s envoy to Ukraine, footage of the meeting released by his office showed.

But before there can be a discussion about Ukraine’s membership bid among the EU27, the European Commission will need to issue a recommendation on Ukraine’s compliance with the necessary membership criteria.

Even though Ukraine’s process is expected to be somewhat quicker than that of other EU member states, it still is likely to be lengthy. Croatia, the most recent EU member, took 10 years to join the bloc. (Euractiv)