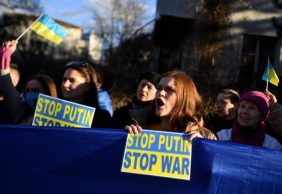 (25 February 2022) – As Russian tanks roll toward Kyiv and with diplomatic options to impact on Moscow waning, the EU leaders made the effort yesterday to put a brave face and express a message of unity.

After quickly agreeing in principle on the second package of sanctions, EU leaders then “discussed the next steps,” namely options for a third package of punitive measures against Moscow.

EU diplomats said it still remains unclear what would be the trigger for a third package, which could include actions that have so far been left out, like cutting Russia out of the international SWIFT bank payment system, which Ukraine has specifically asked for, but on which Germany, Italy and Cyprus, however, have been reluctant to put restrictions. (Euractiv)