“You never know what can happen next minute” 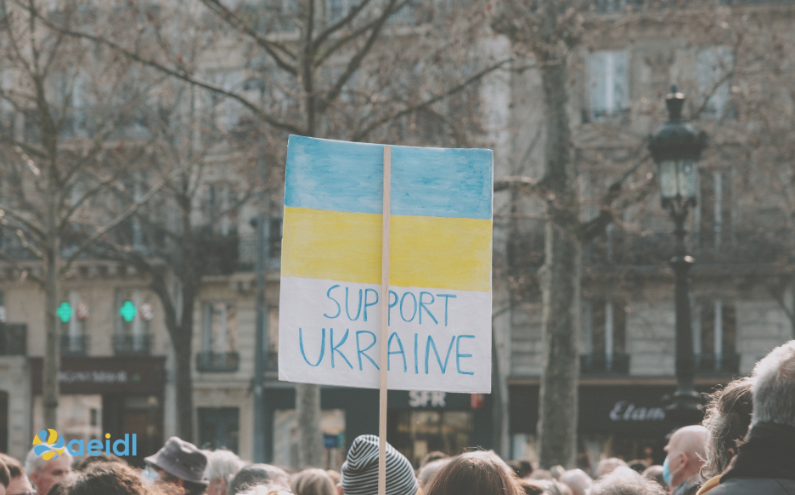 Daryna, who fled Ukraine right after the war started, highlights the importance of local actions to protect citizens and the need of putting aside the political ambitions in the sake of peace

24 February 2022 was a turning point for thousands of Ukrainians. The explosions woke up an entire country to fear and panic. Many have already fled the country, others have preferred to stay, resist, and help as much as possible. Daryna’s story is of a mother wanting to keep her family safe.

She, together with her 7-year-old daughter and her dog, left Kiev as soon as the war broke out and headed to the west of the country, specifically to Lviv, where they spent a week, unable to sleep due to air raid sirens. A shelter, in the form of a standard house basement, was their only option to get through the long nights.

It was her daughter’s emotional and psychological state that pushed her to flee abroad. Budapest, Hungary, was the chosen destination. There, they received the help and support of several friends of her husband, who had stayed in Kiev, as did her parents.

Living in a borrowed apartment, Daryna tries to make her and her daughter’s life not so different from what it was before the war. Simulating the confinement period, remote work and online classes and courses are some of the activities they do in their daily life, leaving “brighter events” for the weekend. “My favourite time is when we can go out just to relax a little bit and to see some spring flowers around us”, she confessed.

But her most “precious” activity is communicating with those closest to her since “you never know what can happen next time, next minute”. That is why she talks every day on the phone or by video call with her family and friends.

For her, it is unbearable to see the pictures and videos from Bucha and Mariupol, to know that “children are killed, and women are raped”. It also impressed her that “people in Ukraine can die from hunger”. “They are innocent civilians who had some plans for future children and seeing all of these makes me cry because I can’t deal with emotions”, she said deeply moved.

But the most difficult and painful thing, undoubtedly, is carrying this whole new situation by herself, not knowing what can happen to her relatives, coping with her own emotions and repressing them to calm her child, a child that “is very emotional and feels everything deeply”.

“Why are Russian soldiers killing Ukrainian people? Why are they killing children? When will Putin go to trial? When are we going to return to Kiev?” are some of the questions that her daughter asks her. “I try to answer and to calm her down, but unfortunately, it influenced her a lot and of course, we have to work to overcome it”, explained Daryna, who had applied to a “psychologist for help”.

The war speaks for itself

Alongside its desire to become a member of the European Union, the war has shown the world the strength and bravery of Ukraine. “We have new military experience, new law enforcement experience, and political experience addressing hybrid threats which elevates us to a higher level of development of our country”, said Daryna. In addition, she believes that the relationship with the EU will be “good and fruitful” as it has found in Ukraine a “strong partner” who now is “protecting them somehow”.

The war has also shown the world the solidarity of Europe with the citizens of Ukraine, as they were welcomed with open arms. “There were not any obstacles to cross the border, we just showed the passport and entered the European Union without any problems, without any additional questions”, she explained in detail.

Emulating Josep Borrell’s thought on security policy, Daryna thinks that it is time “to change”. “The world is changing, and Europe should be ready to answer all the threats and challenges quickly, removing bureaucratic processes because there is no time”, she pointed out, adding the need for local and territorial development for peace due to its “great impact”. “Each community and each territory should be aware about possible challenges and problems, and be ready to respond to them”, Daryna said, using her country as an example.

She explained that before the war started people were taught on how to deal with mines and weapons and children were also taught in schools how to hide, how to lay down, and what to do in a conflict situation. Preparing everyone through these local actions makes it “much easier for the state to protect citizens”.

Even though there are differences between authorities, “when the war started, they removed all political ambitions and started acting together” at all levels. This influences the society in a positive way due to the absence of disputes and the development of trust. “They are on another level of human development because they keep their ambitions aside and support their country in the sake of peace”, she outlined, hoping to return home as soon as possible, when the situation allows it.